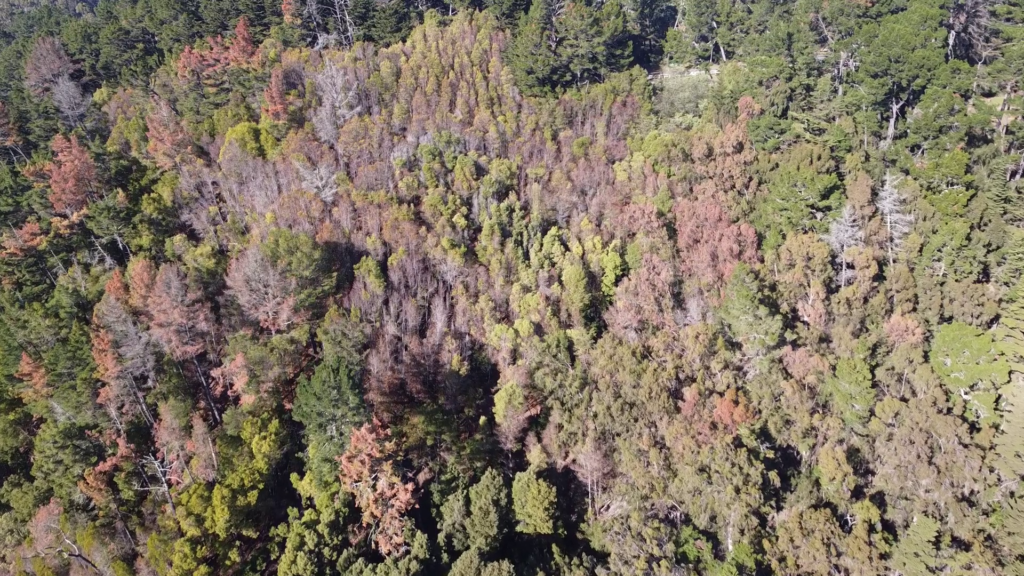 The year 2020 saw a massive die-off of many kinds of trees and shrubs in the East Bay hills, the Bay Area in general, and throughout much of coastal Northern California.  The list of affected plants is long, and includes both natives and invasives.  Many of the affected trees that survived into 2021 are in great distress.  I’ll focus on Joaquin Miller Park (JMP), where all the common issues have been carefully monitored over the past year, and we have a deep photo archive of the developments.

JMP is a 500-acre park, of which about 400 are forest and grassland.  In the photo at right of the Sequoia Bayview Trail in Joaquin Miller Park in January 2021, the dead and dying trees are nearly all acacias and Monterey pines, and cover an area of about 2.5 acres.  There are five more areas like this on the Sequoia Bayview trail.

Here’s what this area looks like from the trail. You can see that in just this one area there are tens of thousands of small dead trees under the canopy, forming a huge load of tinder-dry fuel.  Spring has brought very little recovery to these areas.

The distressed eucalyptus groves in the park occupy a much larger area, perhaps a hundred acres in all.  Although only a small percentage of eucalyptus trees have died, the loss of foliage in the canopy is shocking.

As with the acacias, spring has brought little relief. Many other trees have been affected, but their numbers are much smaller than the acacias and eucalyptus.  On the positive side, some trees and shrubs are rebounding with the spring.

This photo from February shows some distressed oaks on the Sunset trail. You can clearly see the blackened trunks and branches.

Two months ago it appeared that 85% or more of oak trees in the park were distressed by a condition we hadn’t seen before, which oak expert Matteo Garbelotto termed “bottom-up canopy thinning”.  Some looked like they were weeks away from dying in January.

The good news is that nearly all the oaks have grown thick new canopies in the past few weeks.  These are the same oaks in April.

From a fire hazard point of view, one of the most concerning risks is the amount of dead brush that has accumulated, mostly French broom and coyote brush.  Both appeared to be dying in large numbers in January, creating heaps of dry fuel up to 10 feet high.

The coyote brush has bounced back in the spring, the French Broom not so much.  Here’s some broom on the Sunset trail in January and the same broom in April.

The Wildfire Interdisciplinary Research Center at San Jose State has made similar observations all around Northern California.  Even when healthy, broom is a severe fire risk.  In its current state it’s far more dangerous.

Causes of the mortality are being investigated.  In most cases it appears to be disease aided by drought, loss of fog, and higher temperatures.  Because disease is almost certainly involved (and confirmed for acacias) it complicates the management and remediation strategies.  Matteo Garbelotto made specific recommendations in a report commissioned by the SFPUC.  His report was specific to acacia mortality, but the recommendations are generally applicable to areas experiencing disease-related die-offs.

There’s a growing consensus that the dead wood and brush should be removed and replaced with native plants.  Removed how?  Replaced with what?  Managed by whom?  Funded how?  These details will be harder to get consensus on, and any useful solution will almost certainly involve state or federal funding.  Matteo Garbelotto’s key recommendations are:

His focus was acacias, so did not address the clearing of dead or mostly-dead brush.  Nor did he suggest what, if anything, to replace the removed trees with.  That will be an emotional civic discussion.  Martin Matarese, former supervisor of wildland management for the city of Oakland, pointed out recently that “if summers continue to have less than ‘normal’ fog our hills may no longer be able to support trees except in canyons.”  That was in fact the pattern in the Oakland hills before the invasive trees were planted.  Pictures of the hills from downtown Oakland in the 1920s show only grass.  The trees weren’t visible because they were all down in the canyons and/or cut down for lumber.

Whatever the solutions, funding needs to be found and work begun sooner rather than later.  This is much bigger than just JMP or Oakland.  The increased risk of fire threatens large areas of Northern California, and all the wildland-urban interfaces here.  Let’s get started!

“Tree and Shrub Mortality in Joaquin Miller Park”  A presentation by John Brega for the 2021 Friends of Sausal Creek State of the Watershed event.  https://drive.google.com/drive/folders/1C44ElBAqHtH-nU7E5kIe8rsk-GK4oCx-